Your cute-as-a-button baby is now a toddler in his/her second year of life. At around this time, he/she must have perfected those adorable little things that 1-year olds do like pulling to stand and cruising around with whatever furniture that’s along his/her path.

So, what do babies have in store for you between now and their 3rd birthday? Well, get ready to see their personality in full display!

Here are the milestones to look forward to.

At between 9 and 12 months, most babies are busy developing their muscle strength and coordination – important skills that lay the foundation for rolling over, pulling up to stand, and standing unsupported.

Early in their second year, babies will make their first step and another one albeit wobbly. And you won’t be able to stop them onward.

Most babies walk well at 14-15 months. If yours isn’t walking by this time, know that is perfectly normal. Some toddlers take up to 17 months depending on their timetable – not yours. 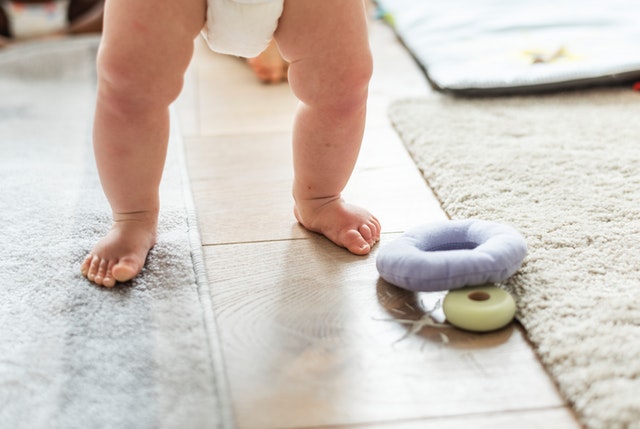 Toddler on the run

By the time your baby turns 2 years, he/she will have grown confident on his/her feet and mastered several key motor skills especially balance. And the chase will be on.

Being able to run will not only open a world full of independence. But it also brings a true sense of joy and happiness. One thing that you’ll notice is that the baby will often be laughing whenever he/she turns into Speedy Gonzalez.

As soon as your child discovers that he/she can walk unsupported, he/she will also want to discover new heights by exploring the world vertically.

At around 18 months, your curious toddler will be a little mountaineer only that he/she will be scrambling on to chairs and then turning around to sit as mom and dad do.

At around 24 months, babies should be able to climb onto furniture to look through the window. You need to be careful, though, as they are also very curious to know what’s there on the top shelf.

What about the stairs?

Mind you, you can’t stop a climber and you really don’t want to. This is an important skill that helps the baby develop strength, balance, and flexibility. It’s also a boon to gaining confidence and learning more about their world with confidence.

Of course, there are a few things that you can do to make this a little bit less dangerous including climb-proofing your house; get rid of rickety chairs and wobbly side tables. Also, anchor all tip-prone furniture to the wall and avoid keeping favorite toys on high shelves.

Walking, running, and climbing often comes with yet another very important milestone; jumping. This one is quite tricky to master as it requires incredible coordination, muscle strength, and most importantly, courage. So, don’t be puzzled if your cute leapfrog claims to have ‘jumped’ even though you didn’t see their feet leave the ground.

Most toddlers typically start jumping up and down at anywhere between ages 2 and 3 years (note, however, that it may happen earlier or later for some kids).

While there are kids who manage to jump off the ground with their both feet at the first attempt, most of them get stuck in jumping with one foot leading. All in all, they eventually learn the ropes and you’ll need to watch out as they can bounce around and off low structures for weeks.

Generally, kids learn how to jump from a standstill position on their own. However, in case your young one isn’t showing much interest in it or seems not to get the concept, you can encourage him with a few simple tricks including;

At between 2 and 3 years, your baby will be making a huge jump in speech and language development. This will be a very exciting moment as they are making tremendous attempts in using a line of words to express what’s in their mind. This makes it possible for both of you to communicate through conversation.

Although their sentences may not always make sense, being able to get their message across will encourage them to communicate more with you.

At 24 months, most kids can say at least 50 words in short phrases and sentences. They can also follow simple directions like ‘bring your toy here’ and name lots of things, for instance, dog, cat, water, food, and ball.

Several months into their second year, they begin to understand and follow 2-part instructions like ‘’pick up your toy and take it to daddy.’’

By age 3, your toddler’s vocabulary list will have upwards of 200 words. At this speech and language development stage, your kid can combine 3 or 4 words to create a sentence.

Their level of understanding has also peaked by now and they can speak much more clearly. This makes it possible to freely engage in simple conversations and tell short stories. They are also able to play more with other kids and share things.

Worth mentioning, while most kids will have a wide range of speech sounds, they might have problems pronouncing words that consist of several sounds. For instance, your toddler might find it difficult to say dinosaur and might, therefore, shorten it to ‘dino’ or ‘disaur’.

Most toddlers also substitute a sound for another, for instance, saying ‚tat’ instead of ‚cat’. They also often tend to omit certain sounds altogether. For example, you might hear they say ‘puter’ when they are actually referring to a computer.

This is just part of their language development that gets better and better with time. At around 8 years, your child should have perfected his/her speech sounds and be able to be understood by most people.

As you’ve probably heard from your toddler’s pediatrician or relatives and friends by now, kids are different and they like hitting milestones at their own pace. Your baby is learning a whole lot of new things and may be slower or faster compared to his/her peers. And there’s nothing wrong with that.

However, if you are worried about your kiddo’s milestone development, be sure to share your concerns with your healthcare professional. This article in only informative, it’s not a substitute for a consultation with a doctor.

Baby milestones between year 1 and 3